Side By Side: A Case for Collaborative Robots

When robots first entered the manufacturing work force in the mid-twentieth century, they were installed to perform heavy or dangerous (or both) tasks, over and over again alongside other robots. Where it was impractical to put the robots in rooms of their own, expensive and space-consuming safety guarding was required to protect humans from colliding with the machines that could neither sense their presence nor account for the fragility of the human skeleton. As robot technology advanced, the machines became smaller, lighter, nimbler, and more useful in manufacturing processes.

No longer confined to spot welding and painting, robots are now deployed throughout the factory floor. Today, robotic systems can be found in modern manufacturing plants loading bulk materials into feeders, and assembling a wide range of consumer goods and medical devices. Very small robots with high-speed picking capabilities have been developed that can quickly sort or collate parts, assemble kits, and inspect finished goods. Mid-sized multi-axis robotic units are used for packing those goods into cartons, bags, and blisters, and then inspecting the packaged goods. Larger robots with payloads up to hundreds of pounds also handle end-of-line processes such as case packing and palletizing. 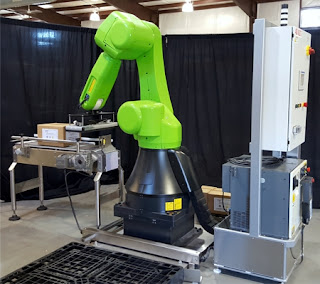 By automating manual processes, especially case packing and palletizing, manufactures can reduce workplace injuries caused by lifting heavy cases or performing repetitive motions. The cost for factory floor space is not insignificant, however, and while the uses for robots in manufacturing evolved, the safety guarding systems, for the most part, did not. Requiring additional factory floor space, PLe-rated safety guarding systems, the standard for robotic cells, include a combination of wire fences, polycarbonate walls, and sensors that, when tripped, cause the robot to stop all activity within the cell. Opening a guard door or tripping a light curtain or area sensor generates a fault in the robotic PLC that must be addressed by the operator before automatic operation can resume.

The development of collaborative robots, such as FANUC America’s CR-35iA robot, marks a new generation of robotic technology. The CR-35iA offers a payload of up to 35kg and a reach of 1,813mm, making it ideal for automating manual palletizing processes. In addition to eliminating heavy lifting for employees, the collaborative robot further increases workplace safety, because the robot itself is designed to operate in close proximity to humans in a shared workspace without the need for safety fences. The green robot cover is padded to reduce impact forces and pinch points by providing a soft barrier between a human operator and a robot arm. The stopped robot arm can be gently pushed away from people or objects by the operator if needed.

The CR-35iA Collaborative Robot features twenty-four (24) precision sensors that cause it to stop all motion when it comes in contact with an object or person. This eliminates the need for safety guarding and greatly reduces the footprint of the robotic cell. Without guarding, the CR-35iA will operate up to two (2) cycles per second. Greater speeds can be achieved (5-6 cycles per minute) with the use of area sensors to detect motion within the robotic cell. Well-designed robot end-of-arm tooling (EOAT) allows the robot to pick more than one case, depending on the case size and weight, further reducing the time needed to form a full pallet load. In applications requiring placement of a deck sheet or tier sheet, the same robot and tooling performs these functions. When integrated with serialization track-and-trace systems, the robot may also be programmed to hold case labels over cameras or barcode scanners to verify the pallet load or provide automatic reject of incorrectly labeled cases.

FANUC America has recently expanded its line of collaborative robots to include compact versions, the CR-4iA with a 4kg payload and the CR-7iA/L with a 7kg payload, that can be integrated to perform a wide range of manufacturing and packing processes. Like their larger counterpart, the smaller collaborative robots also include sensors to allow the robot to detect a collision and automatically cease operation. As collaborative technology evolves, expect to see robots working side-by-side with humans in all manner of manufacturing processes. 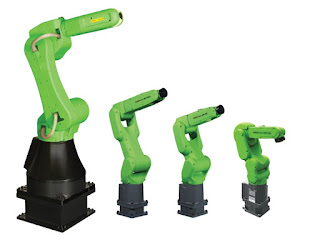