We have all heard the phrase reduce, reuse, recycle. Use less. Use it again. Return it to its original form to reshape it. It’s easy to apply the logic to aluminum cans, but what about packaging machinery? Add a fourth R, repurpose, and the adage also holds true, and with significant cost-savings.

Traditional packaging machinery is designed such that a different automated system may be needed for each step in the process. As an example, a vial packaging line would include one system to pick trays from a magazine and place them into loading position, a second system to load vials in the tray, a third system to pick and place leaflets onto trays, a fourth system to place lids on trays and a fifth system to snap the tray lids closed. When the manufacturer replaces vial packaging with another application, all of those pieces of equipment no longer have a purpose — in essence they become waste, and expensive waste at that. They cannot be re-used. It is impossible to reduce the tooling cost as each system would need to be replaced to handle a different application. And recycling the metal in the equipment might provide some money back, but nowhere near the amount initially spent.

Today, an alternative to traditional packaging machinery exists for manufacturers — robots. A single robot with carefully designed end-of-arm tooling (EOAT) and the correct programming can easily pick and place a tray, pick vials and load them, pick a leaflet from a feeder, place it on top of a tray, pick a tray lid and place it on the tray. A simple device for closing the tray lid may still be necessary, but already the equipment has been reduced from five systems to two. (Admittedly, to do this at any sort of speed, the system would require at least two robots – one to handle the tray placement and loading and one to handle the leaflet and tray lid.) But the real advantage comes to light when the manufacturer changes the product he is packaging.

True story: A customer of ESS called the other day and said, “That robot cell you sold us? Well we’re not doing that application any more. We want to repurpose our robot.” Because the company originally selected a TaskMate™ robotic system, which integrates a FANUC robot with ESS-designed EOAT, they can now use the robotic cell for an entirely different application. The robot, robot base, and controller need no changes. New EOAT and programming for the robot costs very little compared to the cost of a new system. Only a few weeks after placing the order, the system will be up and running the new application. And when that application comes to an end, the customer will be able to repurpose the robot again. With the correct preventative maintenance, many years may pass before the system is at risk of becoming nothing more than expensive waste.

Manufacturers have many choices of how to “go green” when it comes to packaging machinery. A bright yellow FANUC robot in a TaskMate cell is one easy way to do so. 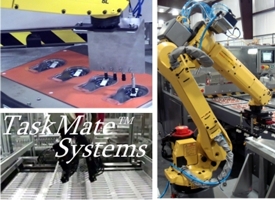